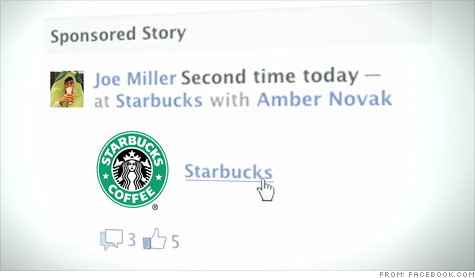 The quick summary is that Facebook will be allowing advertisers to use status updates that mention their brand as part of a “sponsored story” to any friends of the person who posted the update.

I’m half hoping that that is a spoof news story, because if it is true it is slightly horrifying, and a major shot in the foot by Facebook. It smacks of greed and desperation as Facebook continue to try to monetise their huge audience but without thinking about how their cash cow might react.

“Word of mouth is the single biggest influence on consumer brand preference isn’t it?”
“Yeah, so what brands want is to get as many advocates as possible right?”
“Right, so how about we allow brands to hijack positive user attitudes and stick a badge on it, surely that will work?”
“Yeah and we can charge them shit loads for the priviledge”
“Right… so will our users get upset that we are making money out of their status updates?”
“Who gives a fuck, it’s our site, if they don’t like it they can use MySpace!”
“Ho Ho Ho!”

It’s just wrong on so many levels

1) The power of WOM is that it is natural and spontaneous – If people have already bothered to include a brand in their status then a lot of their friends will already have seen it in a natural organic way and it has done it’s job. Taking that status out of context and treating it as a “sponsored story” can’t really add anything to the intial impact and instead makes it forced and unnatural and defeats the power of WOM

2) Consumers consider themselves to be the owners of any content they put on Facebook (or any other social network for that matter). To highlight to them in such a blatant way that as far as Facebook is concerned they own all content on the site is highly dangerous.

3) Who knows what the consumer response might be a) They might stop using any brand mentions because they don’t want to be associated with the advertising, b) They might start actively putting up negative brand mentions in the hope that they are accidentally paid for by the brand that has been mentioned, c) It might become the final straw for some people who are sick of the invasion of privacy and they’ll just leave Facebook

I’ve got more thoughts than time on this, I’ll have to come back to it later, but I do think that Facebook need to be incredibly careful here. You get the sense that they think they are invincible and untouchable, which is incredible considering their swift rise to prominence at the expense of other networks. No-one is indispensible in the digital world – just ask Lycos, AltaVista, IBM, Friendster, MySpace, MTV, AOL, Teletext – please feel free to add many more examples.