It’s been over 6 weeks since my last blog post – “too long!” I hear all one of you shout (Thanks Stuart). It’s been a busy few weeks at work and it just dropped down the list of things to do especially as I now have a nesting wife who is merrily filling my spare time with DIY duties!

However I was wakened from my writing slumber by the anger I felt when I watched this ad from the makers of Nurofen.

In it, a voice that sounds disconcertingly like the guide in Hitchhikers guide to the galaxy explains that over many years scientists have been searching for a better combination of painkillers after talking to wisdom teeth sufferers. They show lots of nice pictures of chemical formulas and molecules and a whizzy gold robot (you’ve got to have a whizzy gold robot!) that draws the following graph 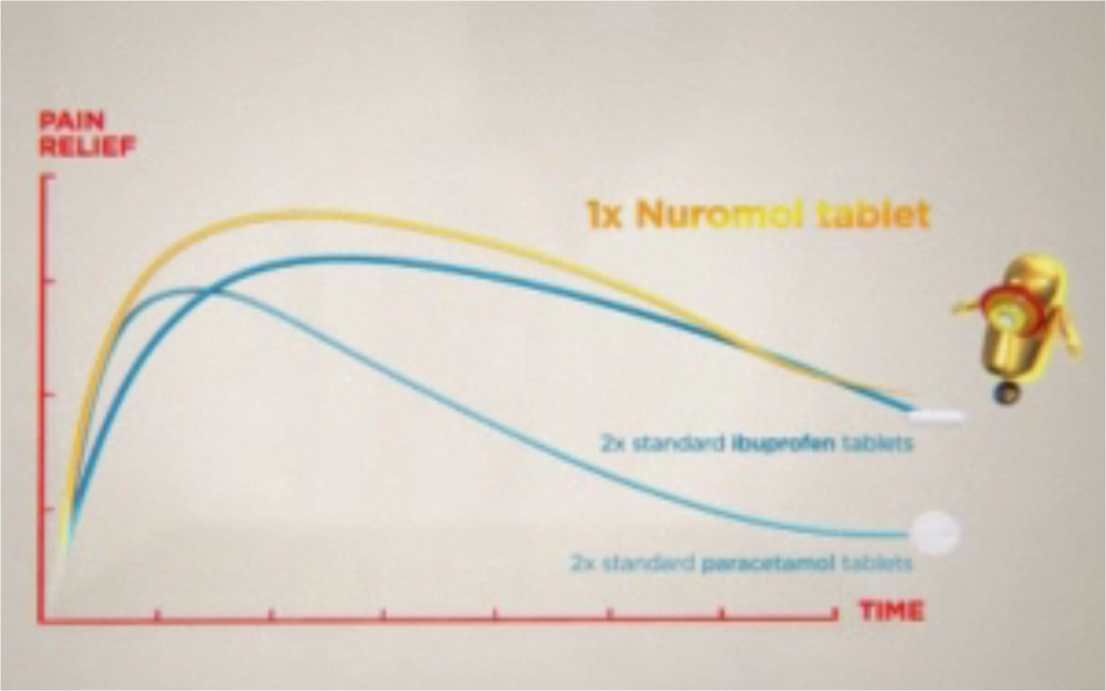 By throwing in scientific references and mention of research done on people with dental pain, they imply that this is something amazingly new fangled, but it is just paracetamol and ibuprofen in the normal dosages that you typically buy those tablets. They must think/know that we’re all completely stupid. Doctors and dentist have been telling people for ages that you can combine both of these as they work on the body in different ways, and my interpretation of that ad, if I didn’t know already, was that all I need to do is buy one of each.

But instead they are suggesting for the priviledge of consuming one large tablet as opposed to two smaller ones I get the joy of a shiny gold box (hence the alchemy reference) and paying lots of money!

And yet it will be a roaring success, that’s what is so depressing – people in pain will, in their desperation, try this product and be adamant that it works better than any over the counter drugs that they have ever tried before. They will tell me that there is something in the “synchro, something wotsit” that makes it work faster/better/longer and that the other stuff “just doesn’t work as well”. I will argue until I’m blue in the face that they are wrong, but they will choose to believe what they think their own personal experience is. The crazy thing is, they are probably right but for all the wrong reasons.

And here’s the rub: Pharmaceutical and supplement products truly are the world leaders in demonstrating the power of marketing. Not only, NOT ONLY can they make otherwise intelligent people pay nearly 250% more for a chemically identical product, but in actual fact marketing makes these products better!

Pain relief is only in part caused by a chemical reaction in people’s bodies. The placebo effect is phenomenaly powerful and the simple act of taking a tablet will on some level reduce a sufferer’s perception of pain. We also know that believing that the painkiller will work will increase it’s effectiveness and marketing is one of the biggest drivers of that belief – therefore Marketing makes painkillers better at their job!

Hope you've enjoyed reading this blog, if you want to hear more from Dan Plant, you can find me on Twitter @electricgingerX or on linked in or google+ as Dan Plant
%d bloggers like this: