I wrote a post a few weeks back after the launch of the “new” ipad, where I bemoaned the fact that Apple seemed to have fallen in to a trap of marketing “more” rather than “new” or “different” – so the “new” iPad was just the old ipad but with more pixels and the faster processor required to cope with more pixels. I compared it to the Galaxy Note 10.1 which incorporated a digitizer and “smart” stylus that I really could see having a revolutionary role in work life. 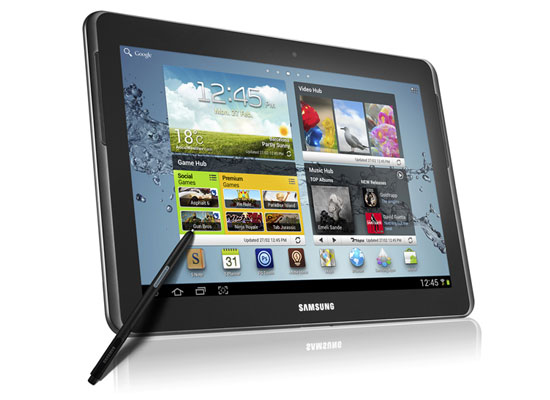 The problem with the Galaxy Note 10.1 however is that they had forgotten the “more” part. So as Apple were redefining the standard of screen technology, Samsung’s 1280×800 screen seemed positively archaic – It is barely better than their new Galaxy s3 which is a quarter of the screen area. It is a similar mistake that Samsung have made with the Galaxy s3 – by all accounts a brilliant device, but the thing that has got the fanboys foaming is that they haven’t upgraded the camera beyond the original 8MP. The fact that improving the number of pixels beyond 8MP usually has a detrimental effect on picture quality is lost on most people – all they understand is “more”

So it is really interesting to see that Samsung have actually delayed the release of their new tablet in order to make it a truly competitive device and add “more” to “different”. Early rumours were that they were just delaying it in order to incorporate a faster quad core processor, but in the past 24 hours runours have emerged that they are also incorporating one of the fastest Graphics chips on the market, which would only be necessary if they were also significantly increasing the screen size. As a gadget geek who would really rather never buy an Apple product this is exciting as it sounds like this new tablet could be a product that I can buy without compromise, where no-one with an iPad can have any sense of superiority.

It’s a brave move, but given the success of the 10.1’s baby brother (the Confusingly named Galaxy Note) it suggests that there is a market for this product and it could finally bring some diversity could open up the market and challenge Apple’s dominance.

All that, and yet no advertising or promotions or any form of formal communications. Just a great product.

Hope you've enjoyed reading this blog, if you want to hear more from Dan Plant, you can find me on Twitter @electricgingerX or on linked in or google+ as Dan Plant
%d bloggers like this: