A while ago I read this excellent article by Martin Weigel in which he debunks a lot of the received wisdom that passes as “facts” in our lovely industry and instead highlights 4 fundamental rules of advertising that every campaign should fulfill before it does ANYTHING else.

Simply stated, these rules are: 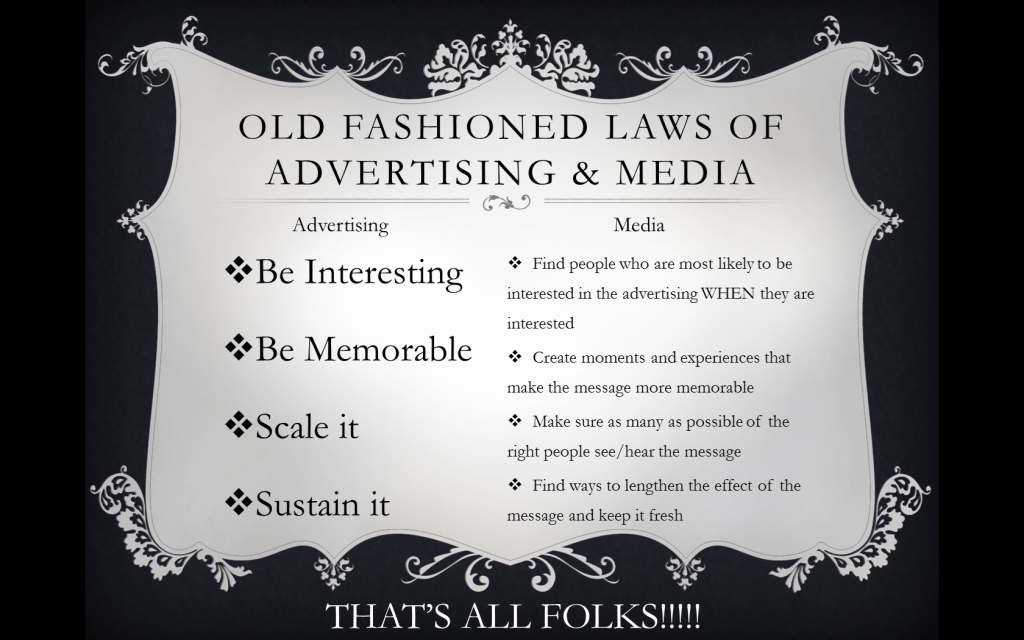 Now a lot of people have commented that these rules are way too simplistic for the new “digital first” world and that it needs to be all about “social content strategies” and “building brand love” and “owning” a “territory”. Now those things may or may not be important, but the fact is, if you achieve all those things at the expense of the 4 rules above then you have simply created a digital white elephant. You’ve spent loads of money creating something that no-one is buying, but you can’t get rid of because someone has formed an emotional attachment and so you spend even more money on its upkeep and getting people to come and see it in order to justify the original cost.

When you lay out the 4 rules like that it seems so bloody obvious, but I keep seeing campaigns proposed which forget to do ANY of them.

Often, the ideas are only “Interesting” to people who work in advertising, they are instantly forgettable and even the people who work on them forget what they made. They rely too often on some mythical “viral” effect and the idea is merely a tactical gimmick that has no longevity at all.

With that in mind, I absolutely LOVED this new campaign from a CARWASH company of all things!

This is the first execution:

In its own right, this surreal humour is brilliant. It instantly sparks your interest with the line “There’s something I should tell you” and then makes sure it is memorable with a series of mental and visual images that you aren’t going to forget in a hurry – Bacon Underwear anybody?. Then the simple line of “It feels good to come clean” and the fact that the whole thing is shot in a carwash means you can’t fail to take out the basic understanding that the advertiser needs you to understand if this is going to affect their business in any way.

It’s simple and near perfect.

What they don’t worry about is “Owning” a particular USP or anything – Obviously every single car wash could use the line “It is good to come clean” and nothing in the advert differentiates the basic proposition from its competitors – but it does make it memorable and distinctive and that is the most important thing.

If it was just the one execution, it would be a good campaign, however what makes it great is the follow-up executions which simply feature increasingly bizarre confessions from the same couple. What I particularly like is that each advert starts exactly the same way, but then has a series of alternative endings. That means that if you enjoyed the ad the first time, you are rewarded for continuing to watch multiple times when it comes on TV and hopefully you will keep watching just in case there is a new execution rather than thinking “I’ve seen this, so I can ignore it”. That’s a brilliantly simple device to sustain an audience’s interest.

What is also interesting is that as a local advertiser, Hughes Carwash has no real interest in getting global viral Youtube views (and so far it hasn’t – only 6000 or so on each video) but it can simply buy local TV spots to generate the scale that it needs. TV spot advertising is still the most effective and efficient way of getting lots of relevant people to watch your AV advertising. Again this keeps getting forgotten in a world of viral “hits” that accumulate about the equivalent of 1 primetime TV spot in views.

The (apparently) incredibly low production budget means that this advertiser has been able to create an almost endless supply of interesting and memorable TV ads that will hopefully drive their business forward in the city of Edmonton, Alberta (Canada).

There are many, many much bigger brands with much bigger budgets that could learn a great deal from these guys.