(DISCLAIMER: It has been brought to my attention that the rant below sounds like I hate social media or digital media. That’s definitely not true, but I do hate bad advertising and poorly thought out communications strategies driven by buzz words which the examples below represent. Also this behaviour is not limited to digital media – “topical” ads in newspapers and posters are often equally irrelevant to the brands being advertised, but they are less hyped and celebrated by the industry)

I’ve been watching with dismay over the past couple of years as brand after brand decides that they “need” a social media strategy because it is the latest thing, without any real understanding of what it should achieve for their brand. They hire a specialist social media agency (rather than an integrated media agency that can give them a less biased view), they buy a bunch of twitter followers (mostly robots or people in click farms in Bangladesh) and then churn out an hourly stream of inane twittering usually involving pictures or short videos of cute animals doing cute stuff.

It doesn’t matter  which category they are in, or what audience their product is for, brands keep following the same trite route to irrelevance. By no means the worst offender, but typical of the behaviour I am talking about is National Express

This is particularly lazy irrelevance, but I guess if you are going to spout worthless communications into the ether, you don’t want to expend too much effort on it.

Some brands put a bit more work in, but rarely make their brand or product even vaguely relevant to the topic at hand.

Some brands try to at least comment on things that are topical, but rarely do they say anything interesting

Even when brands try to add something to the topic that hasn’t been said a million times by everybody else, they still spectacularly fail to make their product or brand relevant to the conversation

I’ve been trying to work out why previously competent and sensible marketeers on otherwise well marketed brands and products, should fail so horribly when it comes to their social media communications. And the conclusion that I’ve come to is that the people responsible for social media campaigns are not targeted against anything that looks like an actual business or brand objective. They have launched into a specific channel led idea without having a clue what it is they are trying to achieve. In doing this they then set KPIs which simply measure one social media campaign against another without any understanding of how that will improve their business.

When social media specialists discuss what this type of activity could possibly be achieving, they tend to mention one objective: top of mind awareness. They think that to stay top of mind they just need to be constantly producing content so that they are visible to their consumers all the time.

What they fail to realise is that “top of mind awareness” is a short hand for “first mention when asked “can you name a soft drink/travel company/mobile phone”” or whatever the category might be. It is a proxy measure for how likely people are to think of your brand WHEN THEY ARE ACTIVELY IN THE MARKET FOR YOUR BRAND, not just randomly across the course of the day. If your brand is visible to consumers across the whole day, but is never connected to a product or brand benefit in people’s minds then it will never get to be top of mind when it actually matters. In fact it’s lack of relevance will mean that when you do have something relevant to say, consumers ignore you because they know not to expect anything of substance from you.

This does not mean however that real time social media marketing cannot work, in fact I believe it can be a very powerful tool when used appropriately within the context of a strategically integrated campaign. What makes those campaigns stand out however is that they never lose sight of the purpose and role of the brand and product in consumer’s lives.

I have found one brand that seems to be doing a relatively decent job of this. (I’m sure there are more, but I do have a life you know!) And NO, it isn’t Oreos (although this years decision to completely retire from the Superbowl social media “Brandter” (My new most hated word) was inspired)

I first came across this brand’s real time efforts with this beautifully constructed ad that was attached to the back of a bike at Wimbledon the day after the longest ever tennis match. 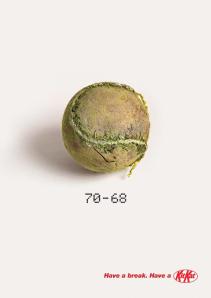 The simplicity and elegance of this solution is possible because everyone can instantly see why Kit Kat is relevant to this story. They have no connection to tennis or wimbledon, or really sport at all, but they have single mindedly stood for the benefit of taking a break for as long as I can remember and so this communication needs no explanation at all. In terms of top of mind awareness, this one could actually work the next time I’m in the mood for a chocolately snack break.

And KitKat, for the most part, have managed to stick to this in all of their social and real time communications. At the very least their brand and product is featured heavily in any of their facebook and twitter posts and where possible they choose their topics based on the relevance of the “Have a break” line. They aren’t perfect, but they are definitely giving it good go.

I also really liked this effort from Jaffa Cakes, who made a strong play for relevance by leveraging their originality and authenticity credentials when a new pound coin was announced by the Royal mint 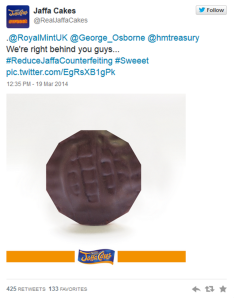 So that’s it basically. If you have a bunch of twitter followers and your social media manager thinks he has something funny to say about Easter; unless you are selling chocolate or are a church, you are NOT relevant. Tie him up or break his fingers but don’t let him post anything next week!!

UPDATE – I’ve been on holiday throughout England’s dismal World Cup campaign, but have arrived back in time for Wimbledon – The perfect opportunity for yet more brands to celebrate their irrelevance – the first example is below from PG Tips

Just a quick post to highlight this opinion piece on the Drum which suggests that brands might be to blame for a decline in consumer interest around social media sites.

Steve Cater goes on to recommend that brands seek not just to exploit social media as a pure media channel, but instead to add value to users rather than sucking all the value out of it.

I wholeheartedly agree – and this resonates loudly with my Sustainable media manifesto that I wrote a couple of years ago.

Interestingly, on the same day, the Drum also posted a piece about Sky media’s adsmart proposition, making the point that to be successful it would need to benefit viewers just as much as it benefited brands.

It is good to see a momentum of opinion behind this attitude, I just hope that advertisers start to pay attention.

This morning I saw a great presentation – #Ownthemoment – from our Twitter sales representatives in which they highlighted the most effective ways to take advantage of Real Time Planning behaviours using the twitter platform. Particularly they highlighted 3 types of event you can look to associate yourself with – Live, Connected, and Everyday.

They then proceeded to highlight a variety of planned “newsjacking” type behaviours that actually mirror the kinds of tactical reactive advertising the press advertising industry has been indulging in for years, but that twitter has provided a low cost and more immediate entry point to. See this Innocent example around the recent furour surrounding the Gareth Bale transfer

Their key point (which I very much agree with) is that Real Time Planning is MORE about the Planning part than it is about Real Time. Most of the “reactive” campaigns that have been celebrated in our industry are in fact meticulously planned responses to highly predictable events. The key is the effective analysis of data to predict likely scenarios and then have a plan for when those scenarios eventually emerge.

That’s all fine. There is definitely a place for placing a series of small reactive bets that IF they pay off can deliver a proportionally huge return on investment. Using the framework of “Live, Connected or Everyday” moments is a sensible way to structure our social communications if we want them to appear relevant and get consumers to engage with them.

My problem with it is simple – it is just too small. Advertising spend on Twitter represents approximately 0.1% of all advertising spend globally. If we generously guess that it has an equal effectiveness to all other advertising then it is essentially worth 0.1% of all advertising effect. If you then manage to align the planets correctly and hit the jackpot with a promoted tweet that is bang on for your brand and a rising trend that day, you might be able to increase its effectiveness by a factor of 10 – or 1000% – giving it a total value to the average campaign of 1%. But it takes a lot of work and a lot of failed attempts to get that jackpot moment. For every Oreos blackout moment

there is an Epicurious Boston moment and hundreds that just don’t get noticed at all.

That isn’t to say that Real Time Marketing isn’t important – quite the opposite – I think it has the potential to revolutionise the way we run marketing campaigns, it is just that I want to make it worth more than 1% (at best!) I want to find a way to apply those Real Time insights to a medium that can make a real difference.

On average, TV advertising makes up 63% of all advertising spend and is rising. If we can use these real time insights and cultural understanding to make our TV budgets work just 10% harder, then that is worth 6% of all advertising budgets. To put it in money terms – the potential prize for getting it right with twitter is global increase of $5billion (and I think that is incredibly generous), but the same level of effort could conservatively be worth $30billion if applied to my TV budgets.

I know where I’d rather focus my efforts.